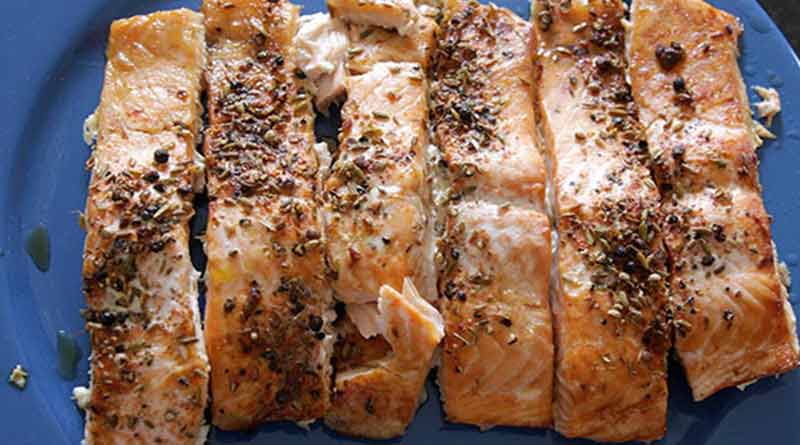 This is great rubbed onto meat, fish or vegetables before they are grilled or barbecued.
Picture shows barBQd salmon steaks.

We have included below some interesting factoids about some of the base spices in this fabulous recipe:

Cardamom – is one of the oldest and most treasured spices in the world. It is the third most expensive, after saffron and vanilla. In India it is second only to pepper in the list of important spices. Its key therapeutic benefit is as a breath cleanser, which happens when you chew the seeds.

Coriander – this spice originated in the Mediterranean region but is now cultivated world-wide. Its medicinal properties include indigestion and migraine cures.

Cumin – this spice gives a distinctive warm flavour to an enormous range of savoury dishes in India, North Africa, the Middle East, Mexico and America. It is used less so in Europe. Its medicinal properties are interesting – it is taken in India as a remedy for diarrhoea, flatulence and indigestion.

Fennel – this spice has long been used in India and China, where the seeds were taken as a remedy for scorpion and snake bites, and has spread in popularity across the rest of the world. Fennel can also be used to ease breathing problems, stomach complaints and toothache.

Peppercorns – black peppercorns are made from green peppercorns, which are pickled, left to ferment and then sun-dried. For centuries pepper was used as currency in the East and West, as it was considered such a precious commodity. Pepper is said to help relieve flatulence and to have diuretic properties (relieves water retention).
We hope that these notes inspire you to use the following blend as a wonderful enhancement to any meat or fish: