Sarah had been hit with every disaster life could throw at her. Redundancy and divorce were followed by the loss of her money, her home, and then her father. She finally took control, and her fabulous journey along The Harcombe Diet is part of a greater journey towards a better life.

Can you tell us a little about yourself?
My name is Sarah Greener, I’m 53 and live in Hemel Hempstead. I’m also 6’1″ and have endured a constant struggle with my weight.

This story really starts in 2007, when I weighed in at 16st 6lbs. My marriage was failing. I was also going through redundancy, and then lost my home in the Med.

Returning to the UK, I was hoping for a new start. Alas my life seemed to continue its spiral.

Within two years, my father was taken ill and later passed away with motor neurone disease. I lost the small amount of divorce money to a scammer, and then lost a home that was being built for me because the builder went bust!

Come 2012, I had resigned myself to the knowledge that I was going to be on my own for the rest of my life. I did visit the gym every day, but my real solace, yet again, was food.

The one good thing in my life was having a job that I’d always wanted to do since I was 18. Yet that too was about to be hit. The stress levels in my life led to my back failing. I had to take two months off work, and was then restricted at work with what I could and couldn’t do.

It was enough to finish anyone off, but I plodded along through 2013 portraying this person who was happy in their own skin and happy on their own.

I went to Weight Watchers, but whenever the loneliness got me I would revert to my favourite food: marmite on toast with a hunk or three of cheese! So it was three pounds off, three pounds on, one pound off… You know what I mean! What was the final straw to taking control?
It all changed at the start of 2014 – literally right at the start.

I woke up on January 1st and saw that I’d gained another 7lbs over Christmas. I was 15 stone, and said to myself that things had to change. I needed a completely new life – not just weight and fitness – and it was up to me to make it happen.

There and then I decided that I would no longer eat anything that was processed. I hadn’t read anything about it; I was just going to do it.

Within two weeks, I had noticed a difference in my hair, my shape, my skin and how I was feeling. The lethargy had gone and I felt ready to take on the world.

I kept going to the diet club, as I needed the regimen of being weighed in by someone I didn’t know. The results were amazing. I didn’t tell anyone what I was doing but had some wonderful comments and the clothes size was starting to drop.

How and when did you find out us?
A friend told me I was actually doing The Harcombe Diet, whatever that was. After a bit of online research, I discovered it and bought two of the books.

Now I’m not much of a book reader, but I couldn’t put them down. I have always been interested in food, nutrition and exercise, but this was enlightening! They told me how I was feeling and why. Yes, I knew I had a problem with wheat, but grapes? Mushrooms! Who would have believed it? So where are you now?
My weight is now 13 stone 6 lbs (pretty good for my height); I go to the gym 3/4 times a week; can now run without feeling like a lump of lard (I did my first 5k two weeks ago!); have been in a relationship for 11 months now, and we are talking of our future!

Things are still tough, as they are for all of us. I have my mum with Alzheimer’s living with me, and there is food in the house that was once a massive temptation for me. However NOW it is in my control, instead of it controlling me. I also have the support of some great friends, family, and my special man.

I love the way I eat and, even though there is the odd blip, THD is now my life. I’m just trying to convince my fella!

Do you have any advice to our readers?
There is so much support out there and I hope that my story can inspire one person to understand this: however hard your life is, you can do it! 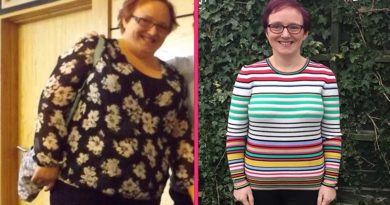