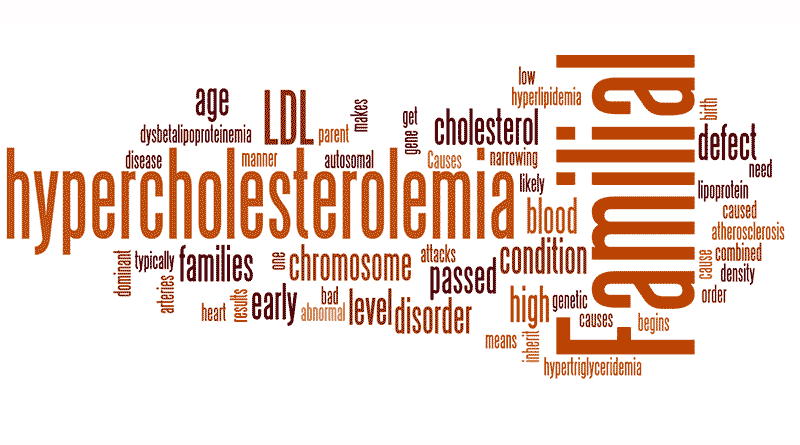 While I was in South Africa, at the Professor Tim Noakes hearing, Familial Hypercholesterolemia (FH) came up both home and away. Back in the UK, a study was published by the Queen Mary University of London arguing that public health agencies should routinely test the cholesterol levels of infants (aged one to two years) alongside the administration of childhood vaccinations. The university’s article on the paper can be seen here. The journal paper can be seen here – not on open view, but I’ve got the full PDF.

We need a basic lesson in lipoproteins to understand Familial Hypercholesterolemia (FH).

FH is a genetic condition caused by a gene defect on chromosome 19. The defect impairs the body’s ability to remove low density lipoproteins (LDL) from the blood stream, resulting in consistently high levels of LDL. There are two types of FH: Heterozygous FH is found in 1 in 500 people; Homozygous FH is much rarer, occurring in 1 in a million births. (Ref 1)

Please keep in mind from the outset how rare even the milder form of FH is – 1 in 500 people. Judging from the comments on my blogs, however, you would think that maybe 1 in 10 people have FH – some doctors are clearly telling people that they have FH simply because they have a higher than average blood cholesterol level. (PCSK9s are currently only approved in the UK for FH – I suspect this is why more and more people are being told that they have FH). My first tip to anyone told they have FH, therefore, is to have a proper genetic test for the condition – a cholesterol level of 9, for example, is quite normal as defined by the normal distribution. A genetic chromosome defect is something quite distinct.

The classic view of FH

One of the first publications from the Simon Broome Register Group dates back to 1991. This review analysed standardised mortality ratios (SMR) for 282 men and 244 women aged 20-74 with Heterozygous FH. The participants were followed up for 2,234 person years. The results were that the highest SMRs, relative to the non-FH population, were for the age group 20-39 and the higher death rates for FH sufferers decreased significantly with age, such that mortality was no higher for people aged 60-74 with FH than for people of the same age without FH.

This widely referenced study also derived from the Simon Broome Register Group. It followed 2,871 patients with Heterozygous FH who were recruited from 21 outpatient lipid clinics in the UK from 1980 to 1998. The patients were followed for 22,992 person years. The standardised mortality ratio (SMR) was calculated for these patients and compared with death rates in the non-FH population in England and Wales. There were 169 deaths recorded, including 102 from coronary heart disease (CHD) and 32 from cancer. The SMR for CHD was 2.5 times higher for the FH sufferers than the general population, but the all-cause death rate was no higher. Non-CHD mortality was significantly lower in men and women. The study found that patients with Heterozygous FH were dying more of CHD, but less from cancer and thus the death rate was no higher overall.

The combined findings from these two Simon Broome Register Group papers show that, if you genuinely have FH and you are aged 60 or over you should be pleased to know that you have a lower risk of cancer and no greater risk of heart disease. If you have FH and are aged 39 or higher, you are already past the highest risk period of your life for heart disease. Even in the 20-39 age group, there were 6 deaths in 774 person years studied – less than a 1 in 100 incident rate and that’s in 1 in 500 people.

Another widely referenced, long, Dutch, study set out to estimate all-cause mortality from untreated FH. The study was described as a “Family Tree Mortality Study”. It traced back numerous descendents from a single pair of ancestors in the 19th century. Those with a probability of carrying the FH mutation were followed. This involved 250 people analysed for 6,950 person years during which time 70 deaths occurred. The study found that mortality was no higher in carriers of the FH mutation during the 19th and early 20th century. Mortality rose after 1915, peaked between 1935 and 1964 and fell thereafter. Mortality also differed significantly between the branches of the descendents studied. The conclusion was that the risk of death differed too much over time, and too much between different descendents, to support the view that high cholesterol was the factor. The study concluded that environmental factors must play a part and must be researched more thoroughly. Sadly this has not happened, because the cholesterol hypothesis has become the only factor considered important with FH.

An alternative view of FH

If you are not limited by the assumption that high cholesterol is bad, you can view FH quite differently.

My logical consideration of FH suggests to me that the problem is that the LDL receptors don’t work properly and therefore LDLs cannot get into the body’s cells in the way that they are supposed to. This means that cells don’t get the vital LDL, carrying the vital protein, lipids and cholesterol needed for the cell’s health. LDL in the blood stream is high because the LDL has stayed in the blood stream and has not been able to get into the cells – where it is supposed to go. Hence high LDL blood levels are the sign that someone has FH. The high LDL levels are, however, a symptom and not a cause, or a problem per se. The problem is that the health of every cell is compromised by LDL not getting into those cells. This includes heart, brain and muscle cells – all cells. Someone with FH can therefore have heart problems – because of too little LDL reaching the heart cells – not because of too much LDL in the blood stream. How differently things can be seen when one is not blinded by thinking that cholesterol or lipoproteins are bad.

A genetic view of FH

There are also alternative hypotheses for FH involving genetics more broadly. These make complete sense. This article, cited almost 50 times, studied 1,940 FH patients for 65 polymorphisms (different forms) in 36 different genes and found a significant association between “Prothrombin G20210A” and CVD risk. Don’t worry about the unfamiliar words – all we need to know is that Prothrombin G20210A is a human gene mutation that increases the risk of blood clots. The study found, therefore, that people with FH who had an accompanying genetic mutation that increased blood clots were more likely to suffer CVD. That makes sense, of course. It also makes sense that a genetic defect, which is what FH is, has more than one consequence. Another genetic consequence of FH (completely unrelated to cholesterol) can be increasing the risk of heart disease (and the same genetic consequence or a different one may be reducing the risk of cancer). The raised LDL would, again, be a symptom and not a cause of heart disease in any way.

You may be interested to know that there are no intervention studies that directly show mortality benefit of cholesterol lowering in FH. Despite this, because of the limiting belief that cholesterol is the problem (and not the symptom), all treatment for FH focuses on lowering cholesterol. Statins are administered. Bile acid sequestrants are used (e.g. cholestramine). Ezetimibe might also be used, which inhibits cholesterol absorption in the gut. Anything and everything that can lower cholesterol is considered part of the toolkit. No benefit has been established in doing this and yet the Queen Mary university article, recommending routine cholesterol testing of infants, proposes that statin ‘therapy’ can start earlier. This recommendation could lead to children being put on statins and other cholesterol lowering medication during their most formative years when we know that cholesterol is a vital component in cell and human development. A clearer case of child abuse would be difficult to find. (The lead author of this infant/statin paper, David Wald, is the founder and shareholder of Polypill Ltd – a four in one drug, which includes a statin).

If raised LDL is a symptom and not the problem, any cholesterol lowering medication would only make things worse. If LDL not getting to cells is the real harm of FH, then any attempts to lower cholesterol will make things worse. We know from the brilliant book by the Yosephs that cells will try to produce cholesterol if they cannot get it from the blood stream. We also know that brain cells produce cholesterol because of the blood brain barrier (which is why statins can have particularly harmful effects to mind, memory and mood). If people with FH are already suffering from LDL not getting to cells, then impairing the cell’s ability to make cholesterol will make things even worse.

People with FH should ideally be given medication (if anything existed) to stimulate cholesterol production within the cell, so that the cell would at least get the vital cholesterol it needs, even when it couldn’t get it from the blood stream.

How differently problems can be viewed when unconstrained by limiting beliefs.

p.s. if you would like to see the Dr Malcolm Kendrick yellow finger hypothesis and a five minute take down of FH, watch this from 15-20 mins.