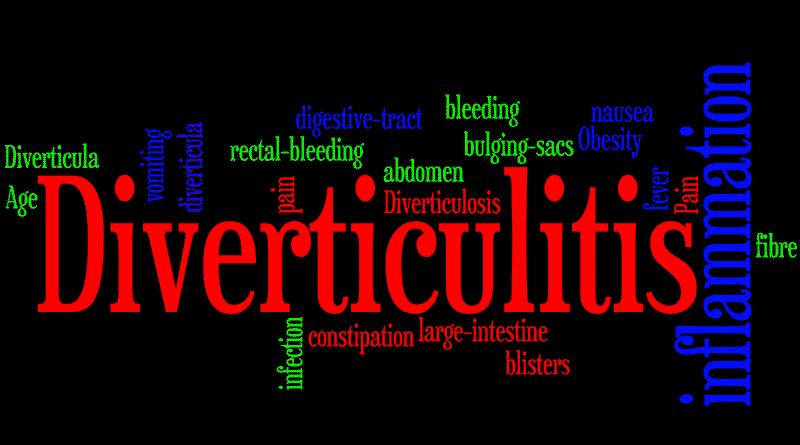 Diverticulitis is a digestive condition. The lining of the large intestine (colon) has sacs (called diverticula), which can get infected or inflamed. Diverticulitis can cause severe and often quite sudden pain in the lower abdomen. It may be accompanied by nausea, diarrhoea, constipation or other symptoms of stomach problems.

On 12th January 2017, the NY Times reported “Red Meat Tied to Diverticulitis Risk”. The article said that a new study had suggested that one cause of diverticulitis may be eating red meat. The study being referred to can be seen here.

This is what is known as an observational study. This particular journal article uses data from the Health Professionals Follow-up Study. The way these studies work is that lots of people are enrolled and lots of information about them is recorded (height, age, weight, smoking, exercise etc). A dietary questionnaire is undertaken, during which people are asked to remember in minute detail what they ate last week  or even last year and then they are followed over many years to see which conditions they develop. Researchers can then observe that, for example, people who consume sugary drinks most regularly have more dental cavities.

In this study, 46,461 MEN were observed between 1986 – 2012 and the number of cases of diverticulitis were matched against their consumption of meat at the start of, and during, the study (the meat intake questionnaire was repeated every four years throughout the study).

All those men, for all those years, resulted in 651,970 person-years worth of data. During this time, there were 764 cases of diverticulitis. That’s an incident rate of 1 per 853 person years. Your chances of winning the lottery are lower than that, but not much else is!

Five things you should know

1) This study was on men alone. Women can completely ignore it.

2) The researchers did not study UNprocessed red meat.

So, hamburgers, sandwiches and ‘ready’ meals containing beef, pork or lamb and goodness knows what else, were all considered UNprocessed red meat.

Anyone who actually eats red meat – plain steak, pork chops and/or leg of lamb – especially those of you who choose pasture-fed meat, can therefore also ignore this study.

3) Observational studies can only establish associations, not causation.

This study suggests that men eating the most ‘UNprocessed meat’ get diverticulitis more than men eating the least ‘UNprocessed meat’. If there is any causation, it is just as likely to be the other way round. I know two men with severe diverticulitis. They avoid all processed food – sugar, flour and processed meat – as they have found processed food exacerbates their symptoms. They have also found that fibre tends to aggravate symptoms, so they tend to eat plain/quality meat, eggs, bio yoghurt and fish as their staples. For these men (and others may well do the same), their diverticulitis has led to them eating more meat. The direction of causation is the complete other way round. (Had the questionnaire not been updated during the study, this argument would have been less plausible).

There were far more likely causation factors identified by the article: “Compared with men with lower intake of red meat, men with higher red meat consumption smoked more, used non-aspirin NSAIDs and acetaminophen more often, and were less likely to exercise…” The painkillers alone would be more likely to damage the digestive tract than rack of lamb. The researchers always claim that everything is adjusted for, but can a whole ‘lifestyle’ really be taken out of account?

4) The risk – even if caused by meat and even if meat is defined correctly – is tiny.

Let’s take the reported 51% difference for those allegedly eating UNprocessed meat (notwithstanding that they weren’t)… A 51% greater risk than 1 case in 853 person years is 1.51 cases in 853 person years. Absolute risk should always be reported and it never is – because there would be no newspaper headlines if researchers did report the real numbers.

As Surgeon Captain Peter Cleave famously said: “For a modern disease to be related to an old fashioned food is one of the most ludicrous things I have ever heard in my life. “

Yet another headline that can be safely ignored. Worry would do you far more harm!

One thought on “Diverticulitis and Red Meat”