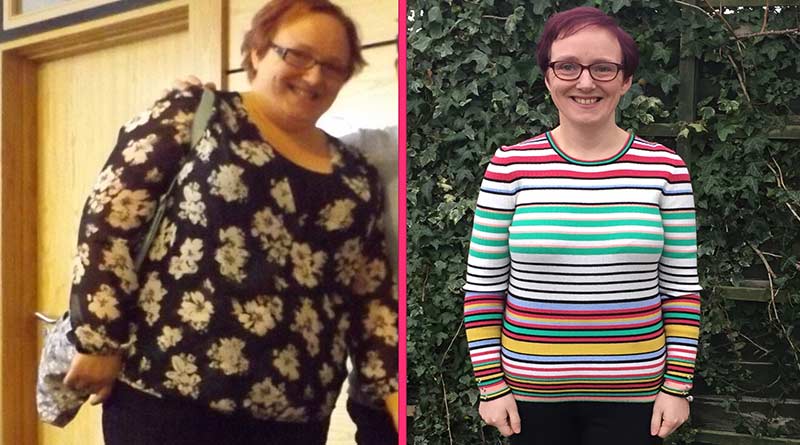 Yo-yo dieter Mandy was at rock bottom. A grieving widow in her 30s, she was left with no job, two young boys to look after, and no hope for the future. She could see a lifetime of loneliness ahead of her. Already 16-stone, Mandy found comfort in junk food and her weight spiralled upwards.

The worry about her boys losing another parent, and the chance of new love, made her sit up and take control over her life. Just 20 months on, Mandy is seven-stone lighter, far far happier, and looking forward to a long and healthy future with her new wife and her boys.

I’m Mandy Price. I’m 41 and live in Lancashire with my wife Julie, our two sons and our 14 month old cockerpoo puppy, Asti.

I have been a dieter all my adult life, but nothing really worked long term and once I stopped dieting the weight always came back on (and usually a bit extra too). I have tried most diets going but the one I used most was Weight Watchers. I went to Weight Watchers classes on and off for about eight years.

It was around 2007 when I worked out that I was spending a fortune going to the classes and buying all their products but that I was seeing the same people year after year and had actually put on four stone since joining. I decided it was healthier to maintain a stable weight (albeit overweight) than to yoyo.

I maintained my weight at around 16 stone for years before it all went wrong: four years ago, my first wife was diagnosed with terminal stomach cancer when our sons were just 10 years and 7 months old.

I gave up my career as an A&E nurse to care for her and the boys full time. To cut a devastating story short: after she died, I was left with my two boys, no job, and a lifetime of grief to contend with. I was only 37, and I turned to junk food and alcohol as I contemplated the long, bleak future ahead.

At some deep level, I was worried about my health and weight. I knew that I should get fit and healthy for my boys. They had already lost a parent and I was seriously putting my health at risk being so overweight.

It was just so hard to find the strength to focus on something positive. I’d seen the results of The Harcombe Diet on others, but I never thought I would have the willpower to give up bread and sugar. It seemed impossible.

In December 2014 I met Julie. We fell in love instantly and soon decided to get married.

As the first few months of 2015 rolled by, I realised that having someone to love me and offer me a chance at happiness again gave me the strength I needed.

I realised that I had survived being widowed at a young age; survived solo-parenting two grieving children; survived entering the world of dating again (along with all the disapproval this brings from people who have no idea what it’s like to be widowed young).

I turned my focus back to taking control of my own life, and started my Harcombe journey in June.
After some initial headaches, I was surprised how quickly my cravings went away. I was eating loads of delicious food and losing weight.

I was completely hooked and, for the first time in a long time, I felt in control. I just knew that I would lose weight and keep it off this time.

Eight weeks after starting, I was 1.5 stone lighter when Julie and I got married whilst on holiday in Florida.

Oh where to start!

The Harcombe Diet very quickly became a way of life. I have far more energy, am sleeping better and my skin is clearer. As the weight came off, my confidence increased, and I’ve never looked back.

By our first wedding anniversary I had lost five-and-a-half stone; today my total weight loss is seven stone.

My whole family enjoys the Harcombe lifestyle. The boys sometimes have added carbs, but not always. We all eat much better than we did before.

I have to say that my wife, in particular, has been amazing. From the very beginning, she cooked such delicious Harcombe meals, that it was hard to tell I was on a diet.

She was also the first to notice changes in my shape, and was always singing my praises. Without her support, I doubt I would’ve done so well.

I’m also very thankful for the support of my fellow members of the online Harcombe Diet & Health Club, and I really enjoy supporting others through their own journey.

My advice is always the same: just do it! Read the books, so you understand why you eat in certain ways. Then when you start, focus on the first five days. Drink lots of water, and repeat the mantra “it’s only five days”. That’s what got me through.

Once those five days are over, you’ll feel so much better that the rest is easy.

I also say often that it doesn’t matter if you occasionally fall off the wagon. It happens!

What’s important is what you do next.

Previously I’d have always thought that I’d blown it, and go on a binge until the next weigh-in day. Then I’d start again.

Now, if I ever slip, I don’t beat myself up, because I know how to fix it. I just flush out the toxins with lots of water, and get right back on plan at the next meal.

This has probably been my biggest mental shift, and I really think it’s vital to my success.

If you have a great story that you’d be happy to share to help inspire others, we’d love to hear from you. Just drop us an email to [email protected] with some details and we’ll be in touch.